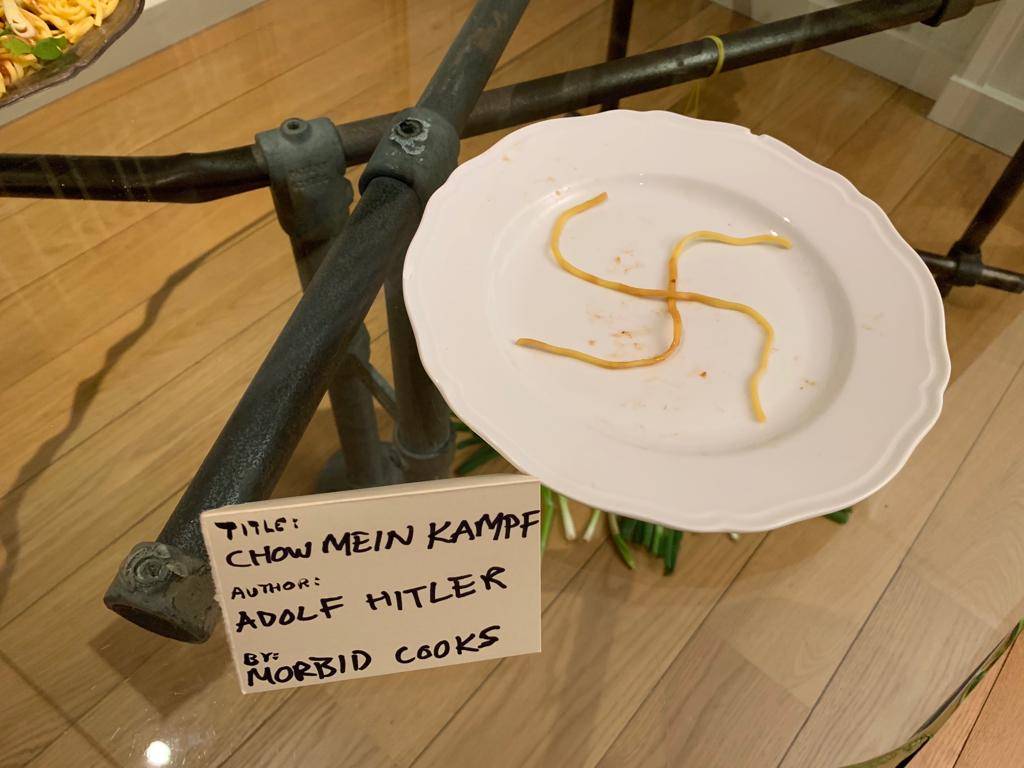 What do you think this is, a swastika or two noodle strands arranged in a visual pun? And how seriously should you take it?

The publisher, Morbid Books, is respectable enough to have its publications on the Tate’s bookshelves (one of its most popular titles is 100 Haikus about Haemorrhoid Cream), but earlier this year it ventured out of its poetical comfort zone to be funny. In March it took part in a “whimsical and joyous” (in other words, small) event called the Edible Book Festival, and there was a competition for the best visual food pun drawing on literature. Morbid competed with a dummy diver hovering over a pile of leeks for “20,000 Leeks Under the Sea by Jules Verne”; there was the end cut off a cream chocolate cake, “The End of the Éclair” by Graham Greene; and the “Illy-ad” - “Illy Coffee Gets You Sex” – by Homer.

Having failed to win it last year with J G Ballard’s “High Ryes’, a stack of crispbreads with a smoking spliff among them, Morbid was triumphant this time with this, “Chow Mein Kampf” by Adolph Hitler.

Six months later it was picked up by an online magazine which branded Morbid fascist, others followed, and stockists like Tate were lobbied to remove Morbid’s books. None have, Morbid have had an onrush of new subscribers, and its magazine A Void, whose next issue will be devoted to “mass hysteria and moral panic”, continues to sell out. Morbid calls it the Night of the Long Noodles, and the editor signs off his report on this nonsense with “Come to Dada”. https://morbidbooks.net/a-void-magazine

A COUPLE of other things happened this week which deserve attention. First, sneaked out in a press release on Saturday morning when nobody was noticing, was the announcement that the DCMS have launched a £250m Cultural Investment Fund.

On the face of it, it’s wonderful news: £50m a year for five years for arts and heritage projects around the country, billed as the government’s biggest ever single investment in cultural infrastructure.

The hint is in the launch, with culture secretary Nicky Morgan on the Today programme on the one day of the week when no-one is listening. It’s a pre-election manifesto announcement, and they have a way of disappearing in a puff the day after the results are announced. In its detail, it seems to be a shoring up of existing initiatives, mostly Arts Council run, like the Cultural Development Fund announced last year which gets a 450% boost.

So it's a gesture to the newly accepted importance of the creative industries to our economy, but is it entirely empty? Given the context in which the announcement was made, it could be Morgan's bid for a Brexit deal: no deal will mean new austerity and this kind of funding intention will be the first to go in those circumstances. But with a deal, and pre-election, this is a commitment that will stand and will have to matched by whoever wins if the Tories don’t. https://www.gov.uk/government/news/new-250-million-culture-investment-fund-launched

A couple of days later came another sentient cultural challenge to the government, this time from Nick Serota’s Durham Commission on Creativity in Education. In more than 90 pages, its report makes the case for creativity at all stages of education from nought upwards if we want an individually successful nation.  It calls on the DfE, Ofsted, Ofqual, schools, universities and agencies like Serota’s own ACE to set aside Gove dogma once and for all, rethink and have kids dancing, acting, drawing and playing instruments outside but crucially also inside the classroom.

“We must prioritise teaching for creativity, in addition to arts in the curriculum, to meet our future needs and give children the opportunity to fulfil their potential” Serota writes in the report’s foreword. “It is our ambition that the Durham Commission report and recommendations lay the foundation… for a long-term shift in educational policy and practice.” https://www.artscouncil.org.uk/publication/durham-commission-creativity-and-education