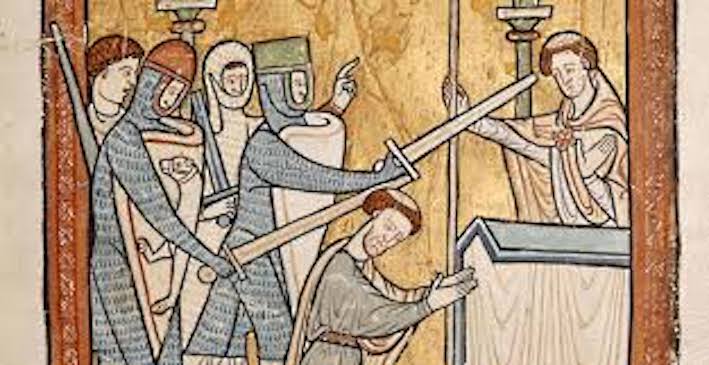 So, the swords are out, rhetoric is already echoing and the familiar chorus seems to be in every corner of our lives, the cries echoing across Europe. And it all kicks off on Monday, I can’t wait.

Murder in the Cathedral, T S Eliot’s rarely performed existential verse play about the assassination of Thomas Becket, opens then at Southwark Cathedral for four performances there, two in Oxford and one in Guildford, before a national tour of cathedrals next year, the 850th anniversary year of the shambolic political crime that shook an empire.

Eliot wrote it for the 1935 Canterbury Festival, but he had the events in Germany, two years after Hitler was elected Chancellor, very much in mind. He used classic Greek theatre ploys to convey the wider world, society, the electorate, in the form of a chorus, its dull lives “living and partly living” coloured by the spectacular crime of the kind that had become almost commonplace in Europe.

The timing couldn’t be better.

Because it is a political play, of course, in which the four assassins hurl abuse at their victim with words like “betrayal”, “shame” and “traitor”, perpetrators of an unspeakably awful act who, after committing it, become politicians who then mount their soapboxes to address the electorate, Marc Antony like:  “…you are Englishmen, and therefore your sympathies are always with the underdog…” - and prove they are truly the underdogs and so, of course, innocence. Becket committed suicide.

And we find that they are not ogres, they’re humans called to do their duty which they have fulfilled. We even know their names: Reginald Fitz Urse, William de Traci, Hugh de Morville, Richard Brito, not prominent politicians but the 12thcentury version of Backbenchers perhaps, not at the centre of power but near to it, ambitious and loyal. And having made their case, they “suggest that you now disperse quietly to your homes. Please be careful not to loiter in groups at street corners, and do nothing that might provoke any public outbreak…” Move along now, nothing to see here.

So get away from politics for a couple of hours and go and see it. It’s being put on by the small ensemble company Scena Mundi, directed by Cecilia Dorland and starring Jasper Britton as Becket. https://www.scenamundi.co.uk

But the politics goes on outside, and already within 24 hours of the election date being decided upon there were arts manifestos being promulgated. Or bids to be included in actual manifestos.

First up was the Creative Industries Federation, which also happened to be first up with its rejection of Brexit after the 2016 referendum.

It’s a ten point policy document, broad brush and not, it seems costed, but it's cogently thought through against a backdrop of the fact that the creative industries are worth £100bn a year to our economy some of which needs to be reinvested in its source. The manifesto is as much a challenge to the Fed’s own members as to the governments of various sorts, that wants

*a £1bn Cultural and Creative Industries Investment Bank regionally focused to tackle geographic inequality, to support sustainable business models in the sector;
*to give bodies like local enterprise partnerships access to evidence and expertise about how they can help early stage enterprises and freelances;
*to cut business rates for cultural, music and heritage spaces; guarantee access for all by increasing national and local investment in the arts;
* a Future Workforce Commission to watch the providers, and kind of OfCult (but definitely not OfArt);
*to put creative education at the heart of schools’ curriculums (see the Durham Commission report, https://www.artsindustry.co.uk/news/1799-creativity-in-schools-vital-for-later-success-durham-report);
*to reform the apprenticeship levy to encourage enterprises of all sizes to take on training duties;
*to introduce a freelance visa to bring talent from abroad unencumbered;
*enforce a proper intellectual property regime;
*and introduce a Sustainability Innovation Challenge so we can join the UN’s campaign to bring creativity to issues like climate change, health and wellbeing, and inequality.

There would be no public outcry if this was taken on board wholesale by one or all of the parties, but whether it’s taken any notice of at all depends on how cynical the politicians still are post the Brexit experience, or taken any lessons from Eliot. Mind how you go.