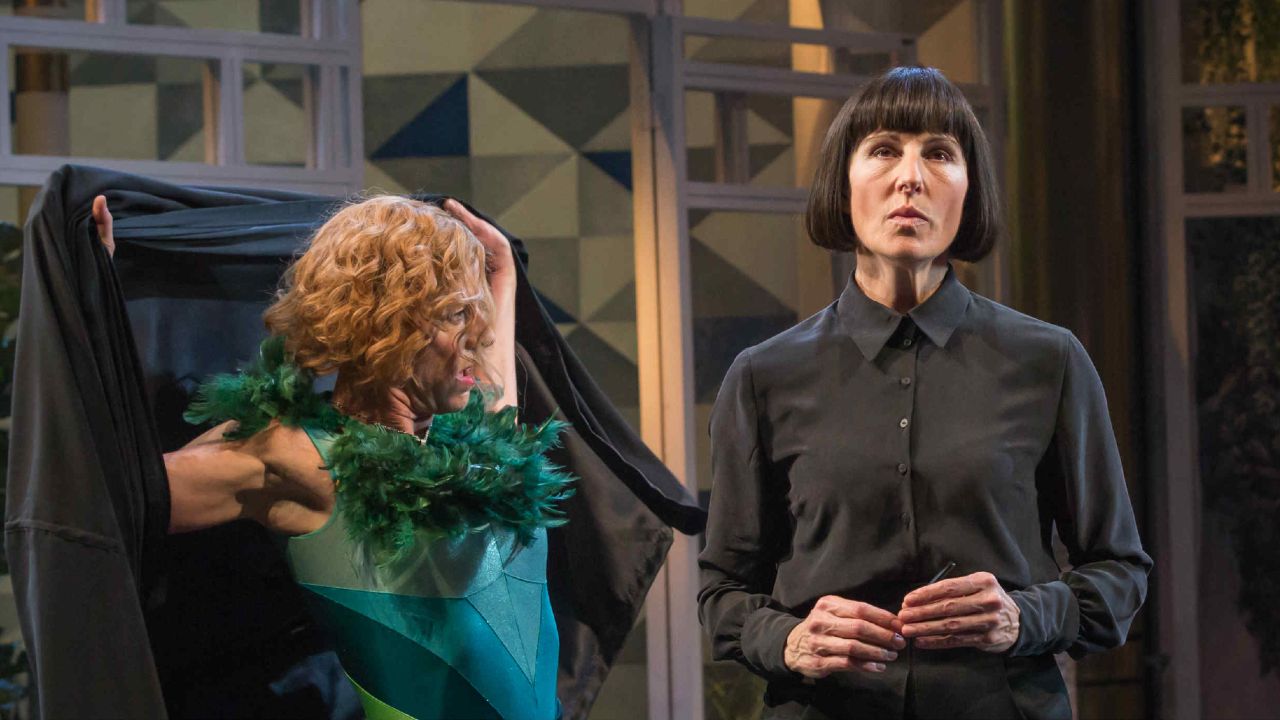 “If you can’t come to art then art will come to you” says the artist Sam Harris, and never has that been truer than in this eerie Covid envelope in history.

Artists, producers, actors, designers, poets - even archaeologists - are making culture come to you, and it might change the way we access and support the arts for ever.

Theatres, galleries, museums, concert halls, bookshops, are shut, causing untold financial nightmares, and yet the resourcefulness of the cultural world has never been more evident - or more valuable – in equal measure with its generosity, despite the bleak prospects post-Covid. What aren’t shut are the airways, audial, televisual and digital.

So just to cheer us up artists such as Quentin Blake, Michael Craig-Martin, Gilbert & George and Damien Hirst have created downloadable posters, some specifically in support of the NHS. At every turn there’s a free concert online, a virtual exhibition tour, a live-streamed theatrical performance, all for free, or mostly, and many of them ask for participation so that there’s an active involvement.

And yesterday the RSC marked Shakespeare’s 456th birthday with its largest ever audience by persuading people online to perform a speech, bake a cake, paint a picture, even serenade a neighbour over the garden fence in Shakespearean theme, and over 1,000 did video here. Manchester’s Royal Exchange Theatre has an annual inter-generational show by its resident Young Company and Elders Company, and the show will go on despite the lockdown, but bigger and better. Instead of the planned show, twice the number of people expected are involved in what is being called Connect Fest, “a theatre show, music festival and soap opera rolled into one”, 40 participants aged 14 to 82 getting together for a show that will be released daily on the Royal Exchange website https://www.royalexchange.co.uk between May 11 and May 15. It may be the model for the future.

The National Gallery already has a vast digital audience, but it grew by 2,000% after lockdown with a tour of the gallery’s pictures which has an emphasis on images of domestic life by staff speaking from their own homes. Artists are teaching, too, with special tutorials on the radio for home-bound kids. And heritage: other museums and galleries are open to those who log-on, with Historic England teaming up with the Council for British Archaeology and the University of Lincoln to offer Dig School (above), a series of free archaeology workshops helping families and children explore the past through their lap-tops  http://digschool.org.uk/.

An important part of what’s been going on in the last month or so has been to do with supporting arts workers in their straits, despite a less than helpful attitude from the Treasury – the latest reflex twitch of its malevolent tail is to tell museums and galleries getting government grants they can’t offer top-ups to furloughed workers in the Job Retention Scheme which gives them 80% of salary, which is often basic national minimum https://www.artsindustry.co.uk/news/2017-treasury-blocking-museum-salary-top-ups.

The BBC was one of the first to step forward with its Culture in Quarantine initiative to commission new work for The Space that it runs with the Arts Council https://www.bbc.co.uk/arts. The Sam Harris of the opening paragraph has just launched the Online Art Show website to help sell the art for artists whose exhibitions have been cancelled. In a more catholic spirit, the German Turner winner Wolfgang Tillmans is selling posters of his artwork for £50 to support music venues and arts spaces at risk of going out of business because of Covid, and he’s recruited 40 other artists – including Andreas Gursky, Marlene Dumas and Betty Tompkins – to step in with his campaign “where a lack of audience is causing an existential threat”, and Tillmans is paying for the printing and shipping of posters. 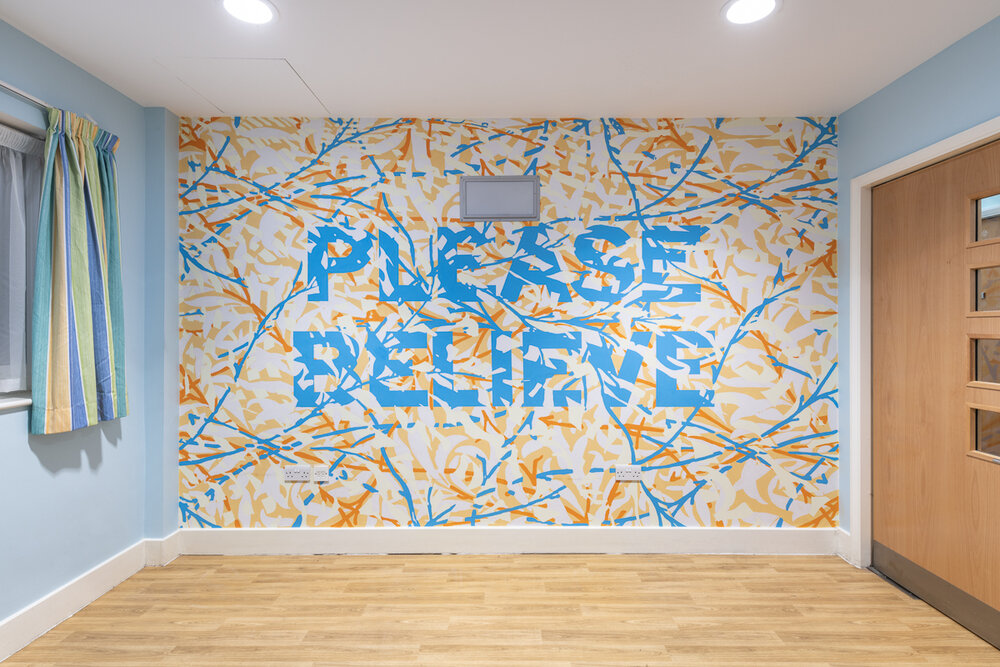 Mark Tichner’s Please Believe at Bluebell Lodge, a care home for the mentally ill and a beneficiary of the Hospital Rooms charity

But the TaitMail prize for the best initiative that not only keeps the art in the public eye but at the same time adds some financial relief to artists goes to a scheme dreamed up by a working painter in which artists can help themselves. This is Artist Support Pledge, devised in his Sussex studio by Matthew Burrows and aimed not at the Hirsts, Gurskys and Craig-Martins but the lesser mortals, the more than competent professional painters who survive by selling their work and whose livelihood has been cancelled by a germ. One of the artists, Elizabeth Hannaford emails: “We post five pieces of work at £200 or less each (incl in my case 10% to Mind) using the hashtag #ArtistSupportPledge and when we’ve sold 5 for £1,000 we pledge to buy another’s work for £200. I was thrilled that two framed postcard-sized w’colours sold within hours - to very good homes”.  There are no enforcements, it’s based on trust.

And it has gone, to coin a phrase, viral. It started on March 17 and in its first week got 9,000 pledges, worth around £9m. “After about four days it went absolutely crazy and I didn't really have a lot of choice but to run with it because it was too big a wave to duck under” says Burrows. “The goodwill has been unbelievable from everywhere in the world—from El Salvador, to America, Germany, New Zealand, Italy and Australia”.

Alongside, and with his friend Keith Tyson, Burrows has created another Instagram outlet for what he calls “artist-on-artist generosity”, Isolation Art School https://www.instagram.com/isolationartschool/?hl=en. It’s free home-based projects for everyone, old and young, ranging from how to make table sculptures by Henry Ward to Isobel Smith making a wearable elephant’s head from  old newspaper, and to come there is flower arranging, painting with varnish, jewellery making to name a few, from the likes of Matt Collishaw, Nigel Cook and Sarah Pickstone. There is even a course for A level students whose schools are closed.

“I want to create an environment and a culture that has human beings attached to it. Not just this anonymous digital thing” says Burrows, and there’s nothing in it for him more than for any of the other artists. “What we are putting out into the world is a movement not a business. The formula is simple: you give generously, you receive gratefully and you give back. That’s it.”

And for the section allowing #ArtistsSupportPledge beneficiaries to give to a nominated charity (the first has been is Hospital Rooms, which commissions artworks for secure NHS mental health units) he has given a label that could be for all the gratis arts offering that has burgeoned in this blight: "The Gifted Keep Giving".