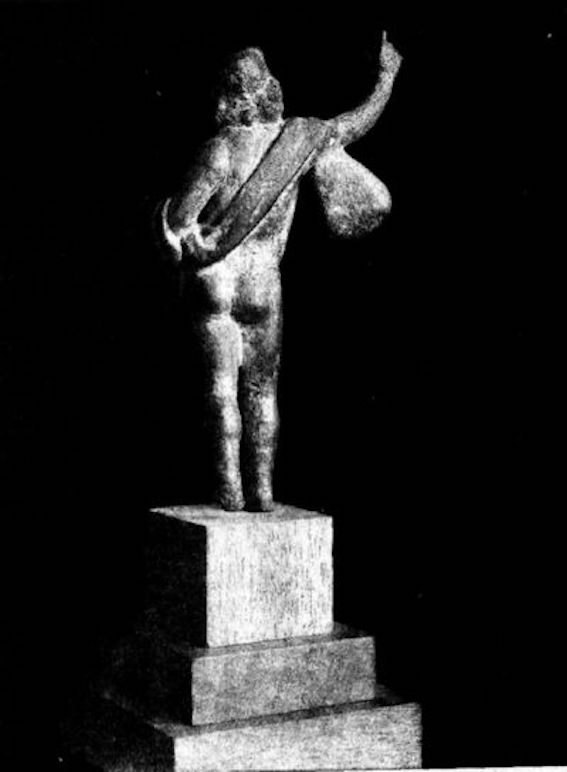 TAITMAIL A humble muse for our time

This little fellow, all of four inches tall, is a muse. Not one of the official ones, but one that some enterprising local museums in Kent hope will generate sweet music. Actually he’s a Lar, but I’ll come back to him.

There’s a long and distinguished tradition of visual art bringing out some of the best in music makers. Respigghi made a whole symphony out of Botticelli’s Primavera, and Auden, Stravinsky and Chester Kallman gathered before Hogarth’s A Rake’s Progress in the Sir John Soane Museum to collaborate on an opera. Hokusai’s The Great Wave off Kanagawa was all the rage in Paris at the end of the 19th century, enough to spark Debussy’s La Mer.

More recently Stephen Sondheim was captivated by Seurat’s pointillist masterpiece of La Grande Jatte and turned it into Sunday in the Park with George. Then there’s Nat King Cole and Mona Lisa… David Bowie and Andy Warhol… Don McLean and Vincent… And it works the other way: Paul Klee’s Polyphony is owed directly to Bach, and Whistler called a series of paintings his Nocturnes in homage to Chopin; in the 1940s Mondrian, not a man known for deep passions, even painted a picture called Broadway Boogie Woogie. And Kandinsky actually painted sound.

But those are great works of visual art inspiring universally admired melody, and sometimes vice versa. Charming as he may be, this little fellow is not great art, but he will be the inspiration for, it is to be hoped, some captivating soundsl.

Not much is known about this bronze figurine, called as I said a Lar - plural, Lares. When it was found by archaeologists in the grounds of a demolished Rochester mansion in the 1880s it was assumed it represented Cupid, but now it's more precisely narrowed down to a household god of about 200 AD whose duty was to bring comfort and cheer to diners round the family board, a witness to important family occasions proffering good fortune with his gesture of benediction, and who may be related to Vesta, the Roman goddess of the household. And that’s about it, apart from the fact that despite their one-time ubiquity Lares are apparently quite rare now.

He has been a fairly humble but well cared for part of the collection of the Guildhall Museum Rochester for over a century, and rather late in the day is making a bid for stardom. The museum is part of a consortium of four museum groups – with the Historic Dockyard Chatham, Canterbury Museums and Galleries and Tunbridge Wells Museum and Gallery. Museums up and down the country may be unsure whether they will ever open again after two months’ enforced closure without income, but the work of the curator goes on. These four are part of an Arts Council funded scheme to encourage visitors, whenever they're allowed in again, and give them a new angle on what they see.

Collectively the four have put out a call to composers, musicians, song-writers, poets, sound artists, to come up with a piece of sound art inspired by this cheeky little chap. Ten proposals will be taken up and their creators paid a £1,000 bounty, https://tensongsforalar.com/. They have until June 15 to submit. The ten chosen pieces will be permanently “accessioned”, as curators like to say, into the joint collection, recorded on vinyl and played in the galleries as well as touring with the object. Odd to think of a piece of contemporary music being a museum object, but that’s partly the point, and while Primavera and Starry Starry Night just had to sit there being beautiful, the Guildhall Lar is going to have to work for his state of musedom.

As well as helping the museums to interpret collections “in new and exciting ways”,  he’s going to have reach broader audiences, establish a working partnership with all four institutions, offer a diverse account of museum objects, change the conventions of commissioning, showcase contemporary artists and get people used to exploring their community treasures digitally as well as personally. Little guy, big job.

The point is that while many museums of all funding strains are facing oblivion, things are not going to be the same again even for those that survive. New thinking is going on even in lockdown - and without access to the likes of the Lar - because that’s what curators do and are being encouraged to do by ACE despite the latter’s necessary preoccupation with its rescue mission.

Life goes on, and if family can be interpreted in terms of community perhaps the Guildhall Lar will cast his benediction over all of us with the music he inspires.