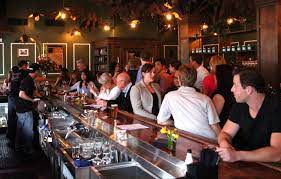 TAITMAIL Down at the old Frog & Biscuit

Pub closures were a tragedy already happening when the pandemic started, and subsequently the mortality rate has risen sharply. According to the Morning Advertiser, the publican’s bible, 446 pubs disappeared in England and Wales in 2020, 37 a month, more than one a day.

Enlarging the tragedy of their loss is that these are our longest serving community entertainment centres, taking many of our shared neighbourhood joys with them.

The survivors can, it seems as I write, be back in full swing from Monday, and Rishi Sunak has introduced a £150m four-year scheme to help communities revive their pubs. But the latest Office for National Statistics figures show that only 24% of them expect to be still in business by the end of the summer.

Our pubs are an institution which has been copied around the world, because they’re not just watering holes, places of refreshment. It’s where we enjoy our most accessible entertainment together.

They were our first theatres, our first music halls, where musicians played, table games were pored over, piano players led the singing, and in a corner of the bar accomplished performers could happily do their stuff alongside rank amateurs. We have added karaoke, gastro eating and quizzing, all things we can’t easily do at home. But what has always happened in pubs, and the commodity people seek almost as much as booze, is laughter.

Pubs are our comedy stores, where stand-up was born and lives on, often standing at the bar rather than in front of a microphone. It’s in the pubs that traditionally comics and comic writers through the generations - George Robey, Ronnie Barker, Barry Cryer, Max Miller, Tommy Cooper, Alan Coren, Mike Reid - have mingled with the likes of you and me in snugs and tap rooms in search of material. But there are millions of bar-room jokes and stories that never make it out of the swing doors, not because they’re particularly filthy but because they are a comedy genre of their own that really only works in the inimitable atmosphere of a pub.

And since you ask, as it happens I have got an example. It’s a story I’ve just found in the archive that came, I think, from a hostelry in East Ham – no longer there - in about 1971. You’ll see what I mean when I say that, sadly for him, Ronnie Barker wasn’t in that night...

It’s a slow early evening in the saloon bar and with nothing else to do the landlord is labouring over the glass polishing, when a little man wanders uncertainly to the bar, peering around him at unfamiliar surroundings. He’s dressed in a flat hat, a moth-eaten scarf, a donkey jacket, baggy trousers and rolled down wellies. He adjusts his round NHS specs and peers at the landlord, who doesn’t know him.

The customer eyes the impressive row of pumps with their different labels, and he rubs his unshaven chin. “What a choice, guvnor, hard to pick… Umm...  I’ll try a pint of that one…”

But before he picks up the pint the customer peers once more at the row of pumps, takes off his specs, polishes them on his scarf and settles the loops over his ears again. “Oh, sorry guv’nor. Not the Boggis’s Very Fine Old Whiskers Wessex County Dark Live Traditional, I meant a pint of that Haskins Extra-Cream Three Exes Cask Matured County Bitter. If it’s no trouble…”

“Perfectly all right, sir” says the landlord, pleased to have a customer at all on this slow, damp Thursday. “Same price”. He takes the rejected pint and puts it under the counter, ready for a less finicky customer later on, and takes a fresh glass to fill with a pint of Haskins Extra-Cream Three Exes Cask Matured County Bitter.

The little man lifts the pint and gazes expertly at the mug. “Now that’s a very fine pint” he affirms. “Not often you can get an old-fashioned pint like that, right temperature and decent head, lovely colour” and with relish he downs it in one go, placing the empty jug back on the copper top bar. “Thank you, guvnor, and a very good evening to you” he says, touching his cap as he turns to go.

“Hang on” says the landlord. “You haven’t paid for that.”

“Haven’t I? But I gave you that pint of Boggis’s Very Fine Old Whiskers Wessex County Dark Live Traditional for that didn’t I? Same price, you said.”

“Yes, but you didn’t pay for that either.”

The landlord tussled verbally with the customer for a while, but with every turn he tried he couldn’t wrong foot the little fellow. Defeated, he rubbed the back of his neck as landlords do, shook his head slowly, and went to the till from which he took a five pound note.

“Here you go” he says, offering the little man the note. “A fiver to go down to the Noose & Gibbet and do it to old Pierrepoint.”

“Go on, a crisp new fiver, the easiest you’ll ever earn.”

“Because Old Pierrepoint gave me a tenner to do it to you.”