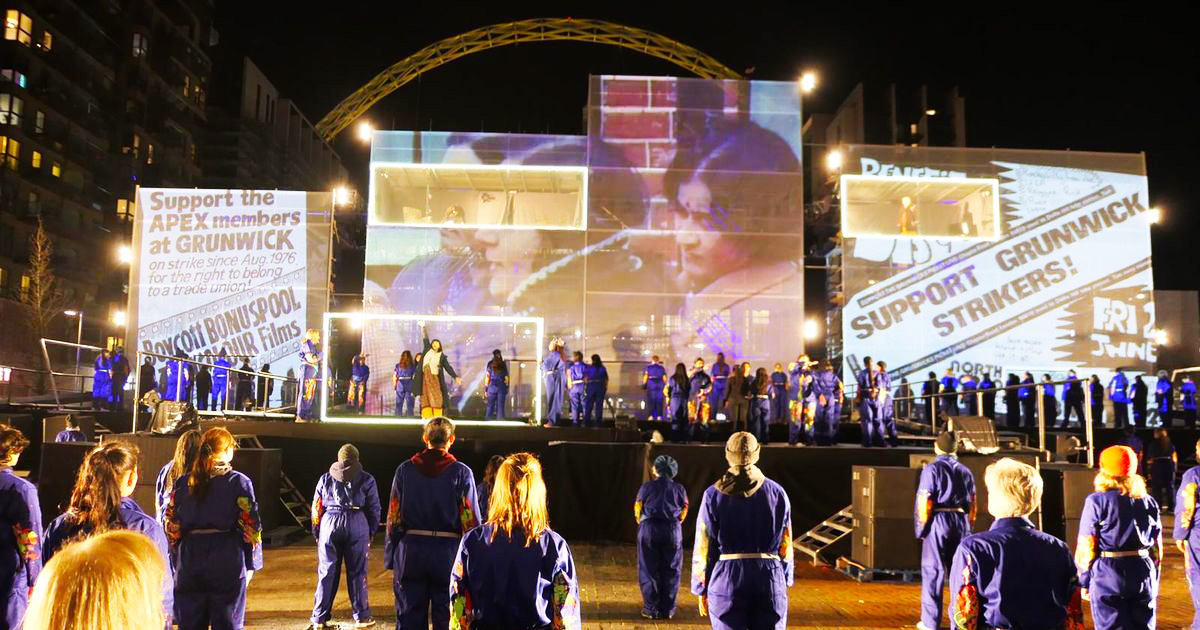 TAITMAIL My street, where culture knows no bounds

When it was announced four years ago the London mayor’s plan looked like bandwagonism that would quickly pass in the night, floated along behind Hull’s hugely successful year as the government sponsored UK City of Culture and Yvette Cooper’s call for “Towns of Culture”. Now it seems to be driving its own, apolitical, path.

It’s Sadiq Khan’s London Boroughs of Culture scheme, and as we await the programme for the third to get the designation, Lewisham, there was a big group hug this week for the second, Brent, as it recalled its Covid-punctuated year.

Khan wanted London’s 32 boroughs to compete for £1.35m in funding, plus £300,000 from the Corporation of London’s charity, to be London’s Borough of Culture for a year. “I want all Londoners, rich and poor, young and old, to be able to make the most of London’s incredible cultural landscape and reap the rewards” he said. “It’s about helping to bring culture to all Londoners, of every faith, ethnicity and background regardless of where you live or how much you earn”. Lewisham’s programme for 2022 will be announced next month; Croydon has 2023.

Winner of the first prize was Waltham Forest for 2019 and, as it turned out, for Brent to get 2020 must have looked like the booby prize.

But that certainly wasn’t the prevailing mood at the Kiln Theatre in Kilburn on Monday for a review of the year. “We’ve got 100 different languages in Brent, and a 1,000 different skin tones” declared our ebullient young hostess Subina Thapa. “It’s great to be together again!”

Lois Stonock, artistic director of Brent 2020, said there were two basic ideas: that the programme should be the beginning of something and they should “use these experiences to shape new approaches to culture”. The second was that it would be a year in which young people would take centre stage.

So Brent turned to its youth to make the year unique, and the first thing it did was to change its title to the London Borough of Cultures in recognition of the diversity Subina exulted in. At the heart of the planning was the Blueprint Collective, a group of 18-25-year-olds who had at first got together as a bid-writing group that went on to develop the brand identity for Brent 2020 and was part of the decision-making process that allocated grants. They are still together, 163-strong at the last count, though their own manifesto declares: “We are the 79,000 young people of the Borough of Cultures! We are the pulse that beats through Brent. We want the unheard voices to be heard, we are their voice…”

This is the point where I record who the Brent-born celebrities are, how much was raised, how many events there were, how many volunteered, the size of the audience, the number of performers, but somehow those statistics don’t seem very relevant. They beg comparison, and comparison is invidious here. As the mayor’s deputy director for culture, Shonagh Manson, says, each borough is different and will respond to the challenge differently.

Brent was barely into its year which had opened with a community cast of hundreds in Rise (pictured here) exploding in front of Wembley Stadium and performing, mostly in dance, its manifold histories – who knew that Harlesden was the world’s second hub for reggae after Jamaica? -  when Covid-19 struck with the UK’s first critical incident being reported at Northwick Park on March 20, followed by the death of a local legend, the reggae star Delroy Washington. The plans, three years in the making, came to a crashing halt.

Or so it seemed; it turned out to be more of a change of step. There was no street party in Kilburn High Road, no reggae festival in Harlesden, no free gig in the Wembley Arena, but Brent’s youthful creatives launched podcasts, created digital platforms and took to libraries and the open spaces to spread the celebrations. “We built Brent 2020, the London Borough of Cultures, with our community – those that live here, grew up here or were shaped by our borough. Despite the global pandemic, uncertainty and fear unprecedented in the borough’s history, they worked together to make it all happen, giving their energy, heart, when we most needed it” said Brent’s mayor, Muhammmed Butt. “At a time when we weren’t able to come together, they kept us collected”.

Deep in the planning for 2020 was the fact that the year of culture will never end for Brent, if its young Blueprint animateurs have anything to do with it. The Royal Philharmonic Orchestra has been enticed to give up its Sloane Square home to move to Wembley, and its players have worked with young musicians (through Brent Music Service and the writer development agency Spread the Word) across the borough to create the Brent anthem, Sparks Fly; the visual art show that has inhabited libraries and streets is to be a permanent biennial; the Blueprint Collective has become a constant. And taking its theme from the Metropolitan Railways name for the belt of London domestic housing stretching into Home Counties, Metroland is the charity established to secure Brent’s cultural planning for the future built, says Stonock, on pride, skills, infrastructures and movements - the chief movement being a shift from council policy to community practice.

The lesson so far, says Shonagh Manson, is how deeply committed local authorities have proved to be, despite losing as much as 40% of their income in the last ten years, and how that support is not always - not often - dependent on money. They need more planning time, though, and after Croydon 2023 the culture boroughs will appear every other year.

But there are other lessons too, as Lorna Lee, assistant director of culture at Waltham Forest wrote in AI this week.

Waltham Forest had its very successful year in the sun in 2019, quite a different colour from Brent’s, but it took on a new power the following year. The Year of Culture had seen the recruitment of 1,000 volunteers, and in 2020 they had become 3,000 running foodbanks, doing essential shopping for the vulnerable, fetching prescriptions. More, the network of arts partnerships set up in 2019 was solid and with a speedily set up grants system so that by April 6 it had a culture programme up and running online and outdoors, giving vital income for the arts community whose work had abruptly stopped. It blossomed into an array of programmes, and called in the help of larger organisations with which Waltham Forest had established relationships in the year of culture, like the Barbican.

The community-led programming that emerged in 2019 was put into earnest action in 2020, with “more innovative, authentic and creative programming”, Lee writes. “It encourages collaboration between local arts organisations and businesses, opening up shared opportunities for funding, boosting capacity and economic growth”.

What the London Boroughs of Culture have shown us is that art and culture need pay no attention to red walls, blue walls, religious or racial differences, or any other arbitrary divisions. As local Brent boy Ekow Eshun says, “Cultural difference is not what separates us… it’s the very thing that brings us together”.