At the In and Out (the Naval and Military Club) Lost in Abstraction 1, 2, 3 takes the recent work of two of our leading abstract painters, Henry Ward and Mark Wright, to challenge the premise of American Expressionists like Jackson Pollock and Mark Rothko, and the critic Clement Greenberg, that abstract art does not represent reality or take any reference from it. It is the exact opposite of figurative art.

“Basically I don’t believe in abstraction” says the exhibition’s curator, Alistair Hicks, who says understanding abstract art is not as difficult as academics have insisted: it’s as easy as one, two, three. “The theories of abstraction in the 50s and 60s were very rigid” he says. “In those days we liked to believe in one system, so people tied themselves to the mast for one particular idea with a monster like Greenberg cracking the whip over them. I’m trying to say we’re over Greenberg now”.

Or as the Ikon Gallery's director Jonathan Watkins writes in his foreword rot the exhibition catalogue, "Let's face it, artistic abstraction cannot be absolutely abstract, but we admire those who strive to take us with them to places without sign posts". 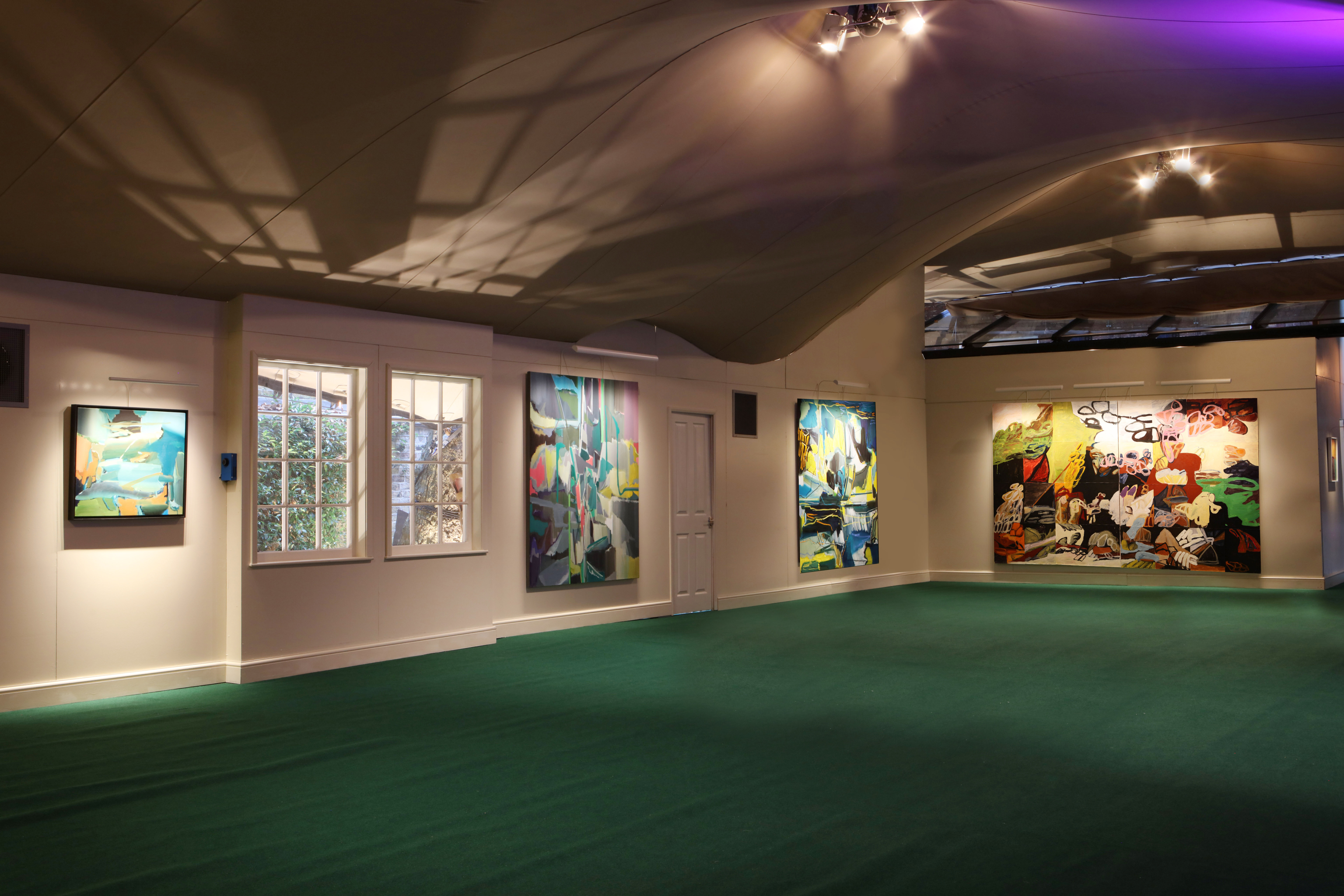 This exhibition is the In and Out’s first venture into contemporary art in a new partnership by the dealers Aleph Contemporary. It is  works done by Ward and Wright, friends for 30 years but never collaborators, since the lockdown and, they say, shows how work that has no recognisable form is still compiled from a single mark as any other painting is, with the artist’s experiences and materials crowding into the construction.

Both have been teachers for most of their working lives, and both have brought new thinking to their work after lockdown. Both have their heroes, from Giotto to Constable to Cézanne to Picasso to Klee to Guston, and both, Hicks says, build their work from nothing rather than realising an already held conception.

Henry Ward found himself separated from his studio for most of 2020 confined to a garden shed that was also being used as a foodstore. The lack of space meant he was restricted to working small scale on foolscap size pieces of paper, rather than the larger canvases of his studio work. “The studio is a place I can work or not work, sit and think, drink coffee… in the shed there’s no space to do anything but work, so that’s what I did”.

There were more than 400 small paintings, some of which were ideas to be worked up later; others turned out to be the components of larger works - the monumental Medusa piece in the exhibition (main image) is 32 shed paintings.

Mark Wright’s experience was different. As Covid struck he had just finished 30 years of art school teaching, giving him more studio time. He is a member of a studio cooperative, Cubitt, with 32 studios in Islington where there was normally a constant exchange of ideas and advice; though the studios were open throughout the last 18 months he was almost always working alone, going over and reworking paintings, and experimenting with colour when he found supplies hard to get. “When you teach you’re giving a lot” he says “through dialogue, psychologically, sharing enthusiasm, whereas now I could internalise, reflecting more on the work and having time to take risks with it. The physical engagement changed”.

But although there are no recognisable images in either sets of work, both artists insist they are not purely abstract - that is, not drawing from anything else. “Reference is there all the time in abstraction, I think, and to refute it is futile” says Ward. “Of course it’s there – whether it’s about gesture, or a colour, or a relationship, it’s there. Like it or not, we start with all those heroes sitting on our shoulders, and as we work they gradually go away as the painting takes over”. 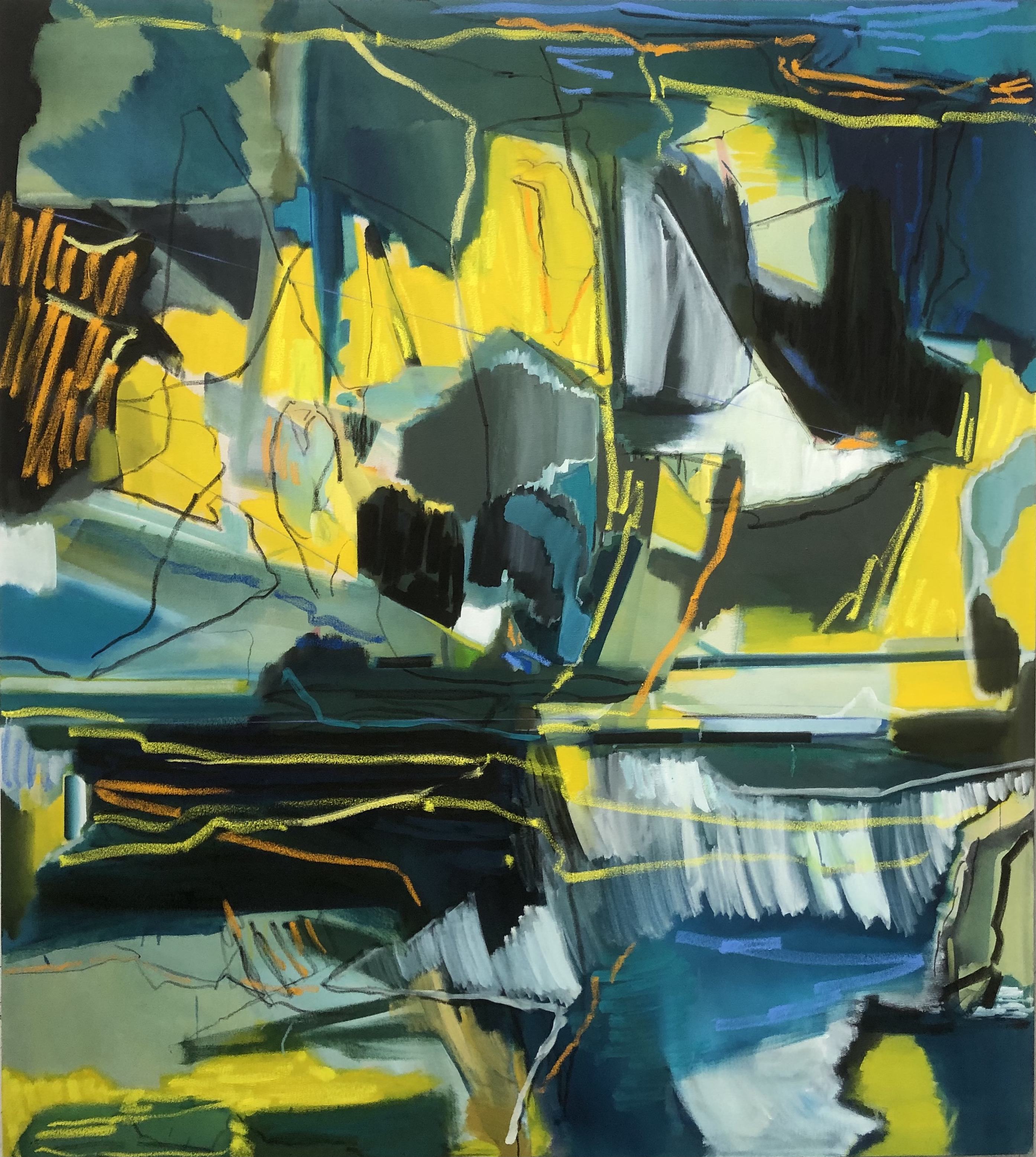 “I’m interested in the word ‘resemblance’” says Wright, quoting the philosopher Richard Wollheim who believed that the viewer contributes to the success of an abstract painting by being able to “see in” and creating shapes in the mind from marks they see on a surface, in the same way as you can see architecture in cloud formations. He uses the paint to guide his brush: in one in the show, Erosion, (above) he has started with the earliest paint that Giotto would have used in the 14th century, distemper, then moved to the newest, acrylic which dries instantly, and finished with oil. There is more luminosity in the structures of his paintings now, he feels, more depth.

Ward’s Medusa was a return to a picture he had loved since childhood, Gericault’s dramatic Wreck of the Medusa. Taking his small acrylic shed pictures and arranging them on a large canvas which he painted over with oil paint, he found himself looking at the Gericault. But that was just the start, soon it was gone as the painting took over a picture in which you might see the wreck or you might find a mythical woman with snakes for hair. Or something quite different. The reference is undeniable. “You have to start with a mark whether it’s a figurative or abstract painting” he says. “The mark will disappear as you build, but without it there is no painting”.

Wright and Ward have been with Aleph Contemporary and its founder Vivienne Roberts for two years. She was introduced to the In and Out by a member who was aware that post-lockdown the club was keen to widen interests for its 3,000 members. An inner courtyard has been turned onto a gallery, and the exhibition nestling among the portraits of long dead generals seems almost surreal.

“We’re delighted to be able to welcome people over the threshold that may not be familiar with it” says the club’s chairman Mark Outhwaite, and former tank commander. “I wanted to challenge members, old and young, and if it’s controversial, well, so much the better”.

Lost in Abstraction: 1.,2,3, is at the In and Out, 4 St James’s Square, London SW1Y 4JU, from October 19 to November 30. Non-members are welcome but have to book via This email address is being protected from spambots. You need JavaScript enabled to view it.