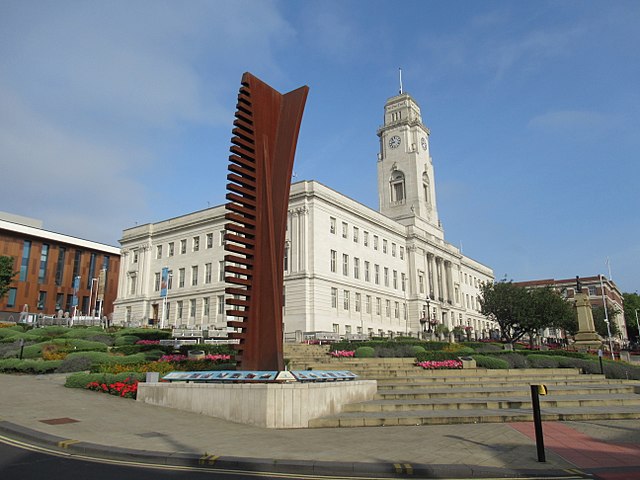 Walk on the square - perhaps piazza might be too fancy a term - outside Barnsley’s gleaming town hall, now repurposed as a cultural space, and admire Nigel Hall’s dramatic Crossing sculpture.

Take a short stroll to the town’s Cooper Gallery, chock full of works by British and European artists from Vanessa Bell and Prunella Clough to drawings by Ruskin and Turner and Thomas Girtin. or to the Civic Theatre with its eclectic programme of music, plays and exhibitions. Wander through the new shopping centre, where three cultural spaces, a gallery, digital space and an exhibition area for traditional artefacts, beckon you away from the chain stores and food courts.

Around Barnsley Market take in the statues dedicated to local heroes like Barry Hines, creator of the iconic movie Kes, and Dickie Bird, onetime cricket umpire and the original professional Yorkshireman, now joined by the first memorial devoted to the victims of the Covid pandemic. All of them due to the homegrown talents of local sculptor Graham Ibbeson.

It’s clear that something significant has changed in Barnsley and anybody who wandered these same streets at the end of the 90s would see it. Then, the final coup de grace had been delivered to the once mighty mining industry: jobs were disappearing, shops were closing, and the town centre looked battered and bruised, like a prize-fighter defeated in his final bout. In 2005 Barnsley’s last cinema closed.

Now there’s an aura of confidence, demonstrated in the revived retail offer, the new clubs and cafés and the cleaned-up heritage buildings, including Eldon Street, home to a revived cinema, the Parkway. Over the past 20 years more than £380m has been invested in the town, creating new offices and shops, NHS health centres and hotels.

On a sunny afternoon, stand on the hill outside Experience Barnsley, the town’s féted local museum which was shortlisted for the 2021 Art Fund Museum of the Year award, and you will see that architectural guru Will Alsop’s vision of Barnsley as a Yorkshire version of a Tuscan hill town was not too fanciful.

Alsop’s masterplan vision, which was commissioned by a local authority desperate to inject some hope into the town, was largely pooh-poohed at the time. But it’s clear that the outlines of his proposals, in which culture would play a major part, have had the impact he desired.

No-one is claiming that Barnsley’s problems are solved. On the contrary, the borough, which includes a mix of rural and urban areas around the town itself, is still the 39th most deprived in England and suffers from poor health and housing. Museums like Experience Barnsley, no matter how well-loved, cannot in themselves bring about the economic transformation that only comes with decently paid secure employment, high-quality housing and all the other measures needed to combat poverty.

But if bringing about that transformation requires recognition that change can come, then the first step is instilling some sense of pride in communities battered by economic headwinds.

That’s the message that can be found at the Bluecoat in Liverpool in a new exhibition. A Civic Role celebrates the arts centre’s engagement with the city, including its contribution to the public debate about the role of art. One of the foundation stones of that engagement is Bluecoat’s commissioning, way back in the 1960s, of Art in the City, John Willett’s extraordinary book about the role of the visual arts in Liverpool through the ages. Willett, as well as being a highly respected translator - of Bertolt Brecht, no less - was also a visionary. Art in the City was a pioneering study of the importance of visual art at the local level, but it was also a treatise on what should happen next. Willett’s view that the arts could be a catalyst for economic revival was revolutionary at the time and his proposals took nearly 50 years to come to fruition - when the city became European Capital of Culture in 2008.

Again, Liverpool hasn’t shed its social problems in the past decade just because it won that accolade.  It is still the fourth most deprived local authority in England (though it’s worth pointing out that, prior to 2008, it topped all the charts as being the worst off in the country). But nobody can now say that the city and its residents have reconciled themselves to the “managed decline” that characterised its self-image in the latter part of the 20th century. The current administration, like the people they represent, is loud and proud in demanding both support and investment and doing its level best to ensure that its own efforts contribute to securing both. Part of that conviction can be attributed to the international spotlight thrown on the place before, during and after 2008.

Like Manchester, Glasgow, Newcastle-Gateshead, Birmingham and Leeds, cultural confidence has been a prerequisite for the economic muscle-flexing that now characterises those cities in the past decade. There is a long way to go - not everything has been improved, as anybody who has used a train in these parts will know. There is also a lot of nonsense talked about towns on the periphery of these great cities having suffered while the centre got all the goodies. Any reading of economic history will show that reducing this debate to an either/or distribution of handouts from a Whitehall grab-bag will end in disaster. Let’s see how the Levelling Up department handles this issue in the coming years.

I have a suggestion for the civil servants busy working under Michael Gove, on what the government claims will be their signature theme. Perhaps they might start their deliberations by heading north and truly experiencing Barnsley.