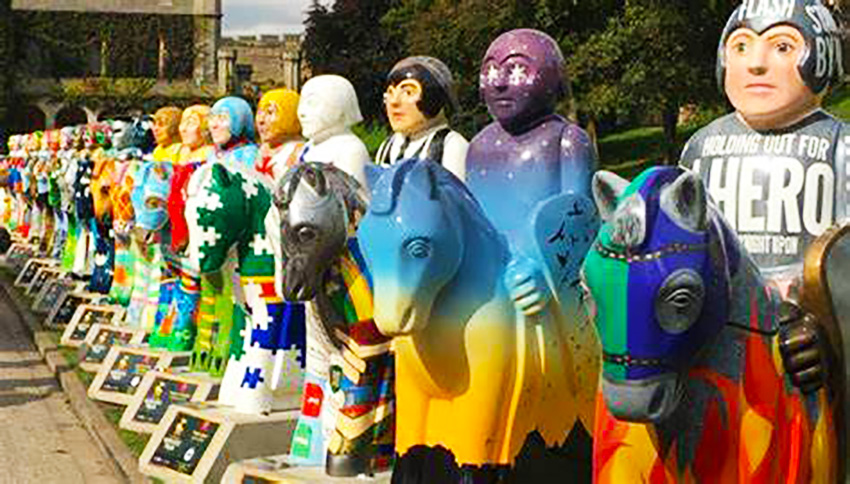 The Battle of Lincoln in 1217 isn’t up there with Hastings or The Field of the Cloth of Gold or Bannockburn in the pantheon of major conflicts that define our history. It doesn’t feature much in the history books or make it to the silver screen.

But nevertheless, five years ago the good folk of Lincoln decided it was worth celebrating the 8ooth anniversary of this event, complete with medieval banquets, battle re-enactments and 36 horseback riding knight sculptures, created by Wild in Art and each re-painted by local artists. It was an enormous success, with thousands of people arriving contributing £1.75m to the Lincoln economy.

But it’s just one of a series of such celebrations which have seen Lincoln transformed into an artists’ playground. In 2015, the city remembered the 800-year history of the Magna Carta, of which it just happens to have a copy, safely ensconced in its own special exhibition area in Lincoln Castle.  Last summer the city paid tribute to its famous mascot, the Lincoln Imp, with dozens of images of the iconic character, which adorns an alcove high up in the cathedral.

This month it’s the turn of Lincoln School of Design to adorn the streets and shopfronts with paintings, interactive chalk drawings, life-size sculptures, and hands-on activities.  And just to ensure it doesn’t get left out, Lincoln railway station is playing host to work commissioned by local artists in an alfresco gallery.

Bumping into sculptures, paintings and outdoor music and theatre performances must be an everyday hazard for Lincolnites as the Frequency International Festival of Digital Culture, which illuminates the city over a weekend of creativity and innovation, is now an annual fixture.

Street art and culture is now such a feature of the city’s attraction for tourists and residents alike, that it’s easy to forget that just a few years ago Lincoln, like many historic places, was struggling to adapt its heritage offer to the demands of the 21st century.

Two major institutions made a difference. The first was Lincoln University, which since its creation in 1996 made it part of its mission to be an integral part of the city’s cultural life. Not just in terms of putting on concerts and theatre, but also in working with other institutions to make sure this city (which had a population of less than 100,000) punched above its weight culturally.

The university is not only the home of the Lincoln School of Fine and Performing Arts and Performing Arts Centre, it is also the base of the Centre for Culture and Creativity, which describes itself as a “think and do tank”. Its idea is to demonstrate the real-world impact and value of culture, to people and place.

One example is Lincolnshire One Venues (LOV), a network of nine visual and performing arts venues in the county working together to improve community-led cultural provision, by developing innovative partnerships which not only attract the best artists to this overwhelmingly rural county but also help to secure funds for local arts practitioners and organisations.

Another is EVOLVE, a three-year strategic partnership programme between the venues, schools and the Lincolnshire Music Education Hub, funded by Youth Music.

The university is the major player in the Lincoln Cultural and Arts Partnership, which organises the Frequency Festival, now in its tenth year, which has exhibited work to over 75,000 visitors and has hosted over 500 local, national and international artists in Lincoln. The partnership, which includes the city and county councils but also a host of other organisations, is the brains behind the successful bids for the many and varied pots of Arts Council and other funding which have transformed the cultural reputation of the city from High Streets Heritage Action Zones to the Ambition for Excellence Fund.

It also helps to have the great and the good on board. Conservative peer and former MP Lord Patrick Cormack, the epitome of the Tory grandee, is also the long-standing chair of the Lincoln Arts Trust which until recently ran the city’s Usher Gallery, and his formidable contacts book has helped to bring a number of exhibitions to Lincoln including Lincolnshire’s Great Exhibition, the Battles and Dynasties Exhibition, the Victoria and Albert Exhibition and the Doomsday Book display.

But perhaps the major voice in the transformation of Lincoln belongs to Lincolnshire Co-op. Led by its CEO, Ursula Ledbitter, who has combined the role with chairing the Chamber of Commerce and the Local Enterprise Partnership, the Co-op doesn’t just have a few shops. It also runs post offices, travel agents, coffee shops, a florist and since 2018 a number of libraries which had been threatened with closure.

The Co-op, which played a hand in creating the new university, takes it role as a developer seriously, revamping and reviving a number of historic premises in Lincoln and other nearby towns. It is also the major investor in Lincoln’s Cornhill Quarter, which redeveloped the city’s historic market building and Victorian shopping street.

Among the latest projects backed by the Co-op is Mansions of the Future, an arts and cultural hub which offers a public programme of free talks, workshops, communal lunches, family activities and spaces to hire alongside national and international artistic commissions.

Not all in the Lincoln garden is rosy, though. A recent spat between the city and county over the future use of parts of the Usher Gallery led to threats of moving its superb collection to Nottingham. A compromise was eventually found. And the city’s famous Drill Hall theatre venue has had to be rescued after its funding was cut by the local authorities, and the rescuer this time was Lincoln College, taking its cue from its big brother university in realising that education and the arts are intertwined.

Lidbetter, who steps down as Co-op boss later this year, is famously reticent about the limelight but she has said that everything she has done in Lincoln is about keeping to the Co-operative Movement’s core values. It’s about collaborating with others to create a better place for people to live and work. That’s a fine mantra to describe what culture is, or should be.

This weekend (March 26-27) many of Lincoln’s attractions open their doors to visitors for free or at discount as part of Discover Lincolnshire Weekend. No better time for other economic development bosses across the country to have a look at what Lincoln has done and try it themselves.