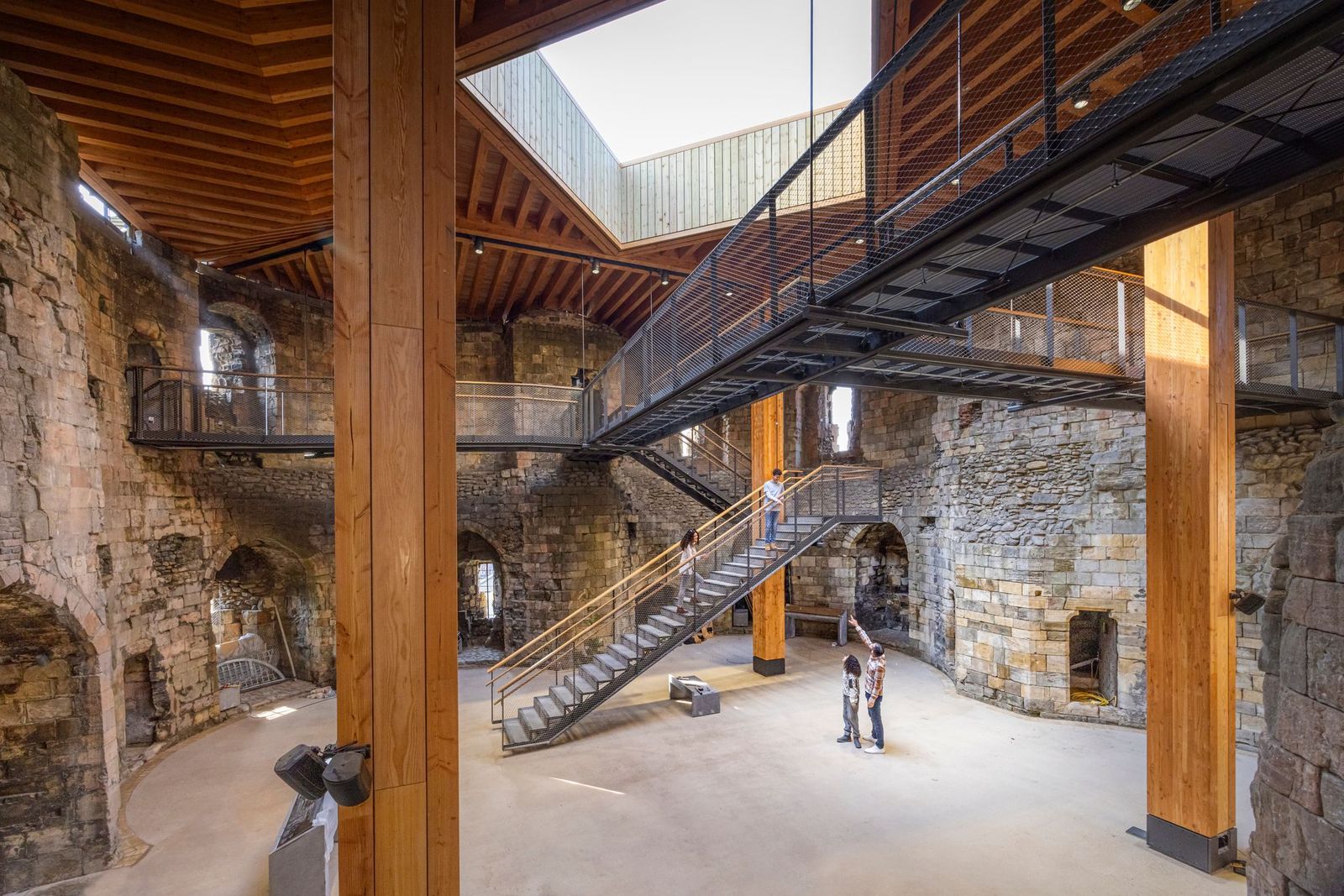 TAITMAIL Opening the Eye of York

York has everything a self-respecting tourist city might want – a smattering of Roman ruins, a magnificent Gothic cathedral, medieval streets with crazily overhanging houses, a clutch of fine suitably colonnaded Georgian buildings, and most of its original walls.  But one thing York is missing is a castle.

What it has is a tower, all that remains of the castle that once dominated the city and the surrounding countryside. Clifford’s Tower is the original keep, and so-called because of a connection between the Clifford family and their role as castle constable.

Originally built as a timber construction by William the Conqueror, it was rebuilt in stone by Henry III in a unique quatrefoil design, its overlapping circles resembling a clover leaf - the only example of such a technique in Britain. York Castle played an important role in England’s long-running wars with Scotland and again in the Civil War when it was taken by Parliamentary forces after a siege. Afterwards, it was used intermittently as a jail before disappearing from public view behind a grim Victorian prison. It wasn’t until the prison was finally demolished that Clifford’s Tower was once again properly revealed and in the hands of the Ministry of Works it became a popular attraction.

But English Heritage, its current owners, have a problem. All those years of neglect and abandonment behind the prison walls left their mark. The tower was an empty, roofless shell and visitors who trekked up the 55 steps had to rely heavily on their imagination to envisage the important role the keep and castle played in the history of York, and indeed the story of England. Compared to the magnificence of York Minster or the city’s Georgian built heritage, Clifford’s Tower seemed “mouldy and miserable” according to one noted traveller. Research showed that there were few repeat trips or positive recommendations from visitors.

As tourism boomed in the host city, various plans were put forward to improve facilities. In 2014 English Heritage applied for permission for an extensive restoration of the tower, with a new visitor and interpretation centre to be built at the base of the mound.

But Clifford’s Tower has become an iconic building for the city and its citizens, who have grown rather fond of it.  The mound on which it perches has been a huge favourite with children who enjoyed rolling down its slopes, and with adults who used it as the centre of the annual devilment known as Mischief Night. A trip to the top of the mound to have your photo taken with the spring daffodils was a perennial outing for York families. What’s more, the tower’s position in the centre of the city, surrounded by other fine Georgian and Victorian buildings, made many wary of changes which would detract from the area, known as the Eye of York.  For example, a commercially led plan to develop a new shopping centre nearby was dropped in the early 2000s after huge protests.

The English Heritage plans were also greeted with outrage and dismay. The concrete and glass shop, display area and café within the mound were condemned and described as a “toilet block” by objectors. Despite the proposal getting the go-ahead from council planners, anger grew and an independent councillor crowdfunded a legal challenge to the scheme. The local MP petitioned ministers to overrule the English Heritage plan and archaeologists warned it would create “substantial harm” to one of England’s most significant ancient monuments.

Finally, English Heritage gave in. A new proposal to restore and refurbish the Eye of York, called the Castle Gateway scheme, gave the organisation’s new North of England director, Andrea Selley, cover for the u- turn. “The momentum behind transforming the Castle Gateway area is genuinely exciting and it may open up opportunities for Clifford’s Tower that previously did not exist” she said.

“We also became increasingly conscious that many people have a deep emotional attachment towards the mound and the thought of changing it – even slightly and even with the very best intentions – was too much for many.”

Architects Hugh Broughton and Martin Ashley were told to go back to the drawing board and a new plan was drawn up. The visitor centre and café were dropped and instead the new scheme concentrates on taking the visitor up and through the interior of the tower. Two previously inaccessible spiral staircases have been opened up and a free-standing timber structure within the walls supports a new network of internal walkways and a roof deck from which you can see a panorama of the city.

On the tower’s first floor, hidden rooms reveal the tower’s architectural details including a Royal chapel and a toilet built for Henry III. Soundscapes with local residents voicing the words of (fictional) historic characters, explain the importance of various periods in the tower’s 800-year history. For the first time proper recognition is given to one of the bloodiest episodes in the story, the massacre of 150 Jews who were rounded up and killed in a pogrom in 1190. Access is better, the steps up the mound now have handrails and resting places and there are tactile maps and audio guides available.

What’s also changed has been a greater sense of collaboration between the various organisations who have an interest in the Eye of York. English Heritage, York Museum and the City Council have put together an ambitious plan to bring major improvements to the area surrounding the tower. Although the incremental programme, which will eventually get rid of an ugly car park, will happen gradually, the tower scheme itself is the first to bear fruit.

Does Clifford’s Tower finally earn its place in the pantheon of top-flight attractions in York? The scheme has taken two years and £5m to complete, but the verdict on the changes this time has been positive with many visitors since the official reopening on April 2 have giving the experience the thumbs up. Even some of the original protestors have voiced their approval.  Perhaps we will see concerts, talks and other events in the brand-new space that has been created in the once empty and cheerless building.

If so, it will be another triumph for a more holistic approach to heritage. Other cities, please note.