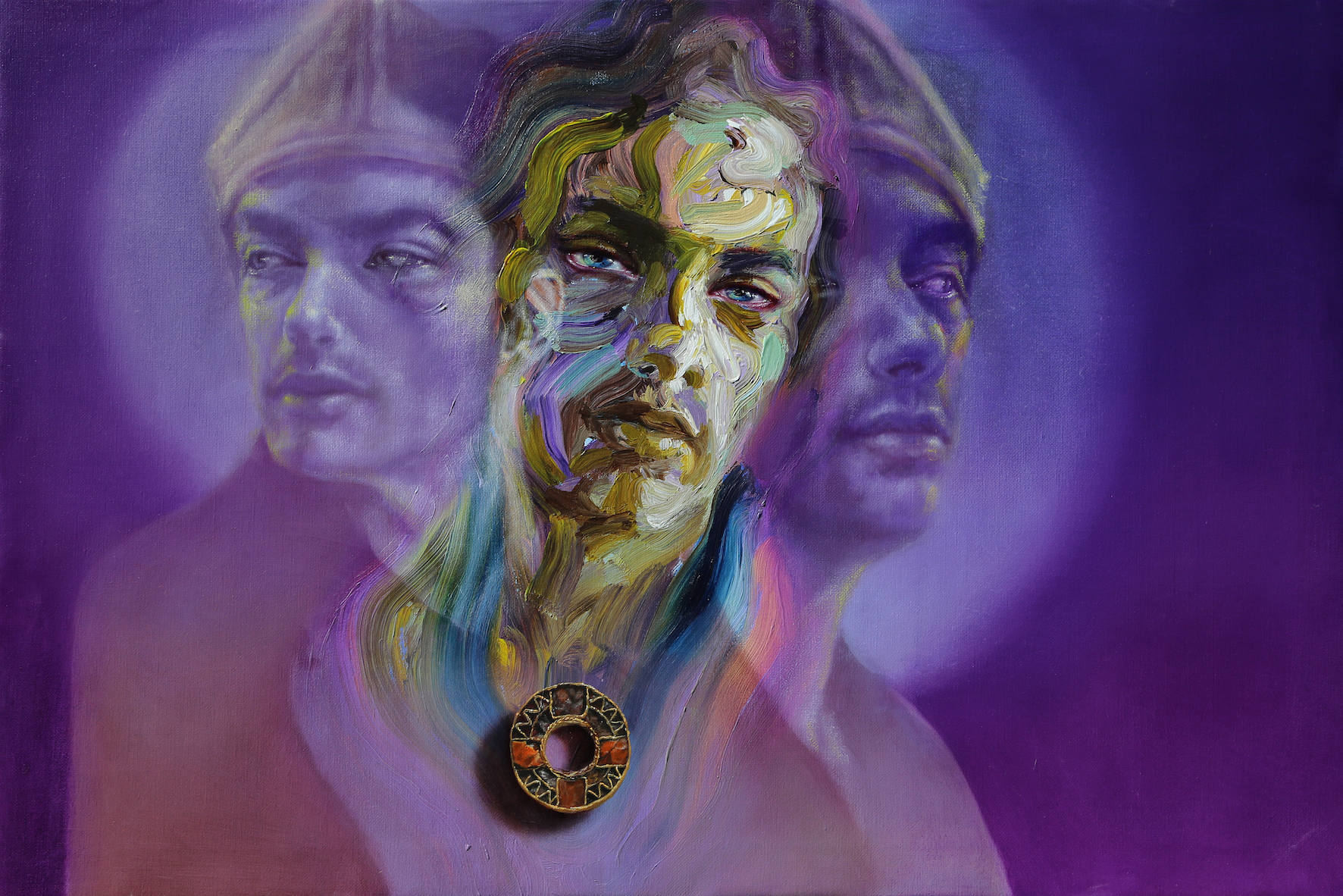 Sara Shamma is known for her uncompromising paintings of the human condition - her own website has as its main image a brain laid bare in all its glistening viscerally.

Her exhibitions have had as their themes the horrors of the Syrian civil war experienced in her native Damascus, great sweeping brushstrokes carving out furious shapes - a man whose face is smeared inside a tattered stocking, a garrotting, a set of bones set like a throne, hyper-real human body parts. And modern slavery, based on interviews with trafficked women leading to portraits with dead eyes in which no future shines, of a mother who was forced to sell her daughter in order to feed her other children.

But her latest work, three portraits, is different, made in a different mood and for a different ethos: the tranquil might of Ripon Cathedral, one of the first stone buildings in Anglo-Saxon England built by St Wilfrid of York in 672AD, reportedly with references to the architecture of ancient Rome (only the crypt of Wilfrid’s church remains, the rest is largely 13th century).

It’s part of a long-term project by a small enterprise called Art in the Churches to use contemporary commissioned art to make connections with some of our earliest buildings, which happen to be largely churches, and bring visitors back into cathedrals, not necessarily to worship but to feel the history.

So Shamma has turned her back on the nightmares that have inspired her work until now. “I haven’t drawn on those experiences for this” she says. “I’m working on portraits in a new way by building from the stories of subjects we can’t see because they’ve never been depicted and creating their images that way, making the eyes as if they’re looking through you.

“You have to live the subject to make the image work”.

She is a non-practising Christian but her religion was never in question when she was commissioned, found by the Art in the Churches producer Chris Baily scanning the internet. She was one of four artists commissioned, along with another painter, a sound artist and a poet, and the exhibition in the cathedral, From Rome to Ripon, which marks the 1,350thanniversary of its foundation, is on until November 1. 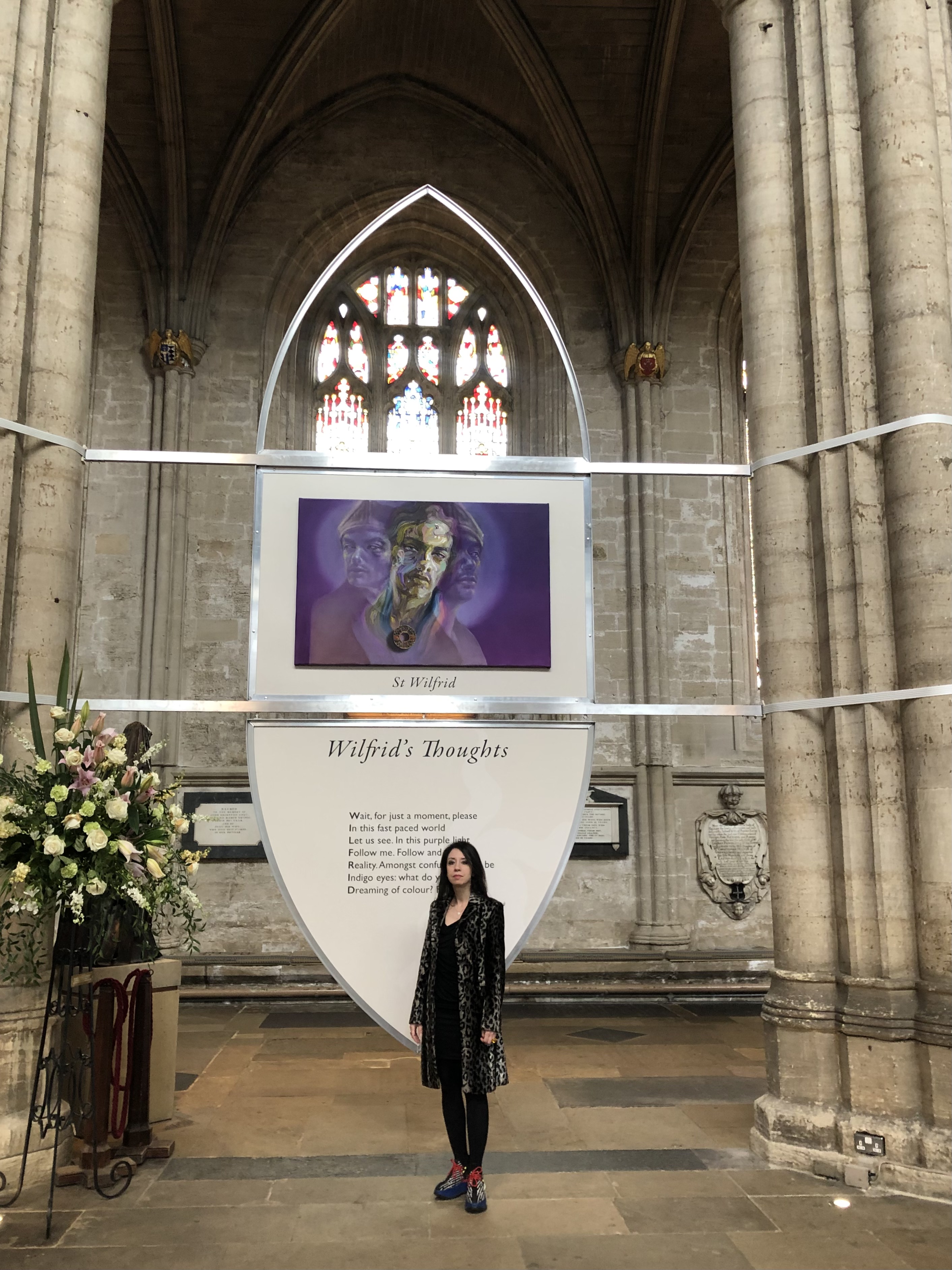 For Shamma it was almost a mystical experience as she immersed herself in the remote Dark Ages with the help of the cathedral authorities’ archives and the early medieval ecclesiastical history authority Prof Joyce Hill. Shamma rarely does preliminary drawing and prefers to work straight on to canvas. As well as studying the lives of the characters whose features she has imagined, she drew inspiration from the atmosphere of the cathedral and its medieval carving which is by no means always sacred and often profane, the early artists clearly given free hands by the church authorities to represent life as it was lived as well as thoughts of the after-life.

She had expected to be painting an aged cleric, her brush bringing to life the benign lines of wisdom and experience, but instead saw the features of a vigorous, worldly wise, well-travelled, pugnacious and ambitious young man in his prime (though he lived well into his seventies) emerging from her canvas, seen from three angles as he gazes intently around at his world. This man is someone I can know.

Wilfrid (633-c710) was a Northumbrian nobleman who entered the church as a teenager and travelled widely to Canterbury, France and Rome before founding his monastery at Ripon. He was flash - “not so very religious” says Shamma - dressing opulently and travelling with an ostentatious retinue, she discovered. He was not afraid to challenge rulers in his mission to bring churches in line with Benedictine rules and the legislation of the pope. He was imprisoned at least once and exiled several times, but was a key figure at the Synod of Whitby (664), arguing on the side of Pope Vitalian, and it’s thanks to 31-year-old Wilfrid’s persuasive oratory that the date of Easter along papal lines as opposed to the calculations of Celtic churches was decided upon, establishing Roman Catholicism in England for the next 900 years.

Shamma’s other two subjects were important parts of the Wilfrid story. Theodore of Tarsus was the Greek Archbishop of Canterbury who supported Wilfrid at crucial points in his career, and she has projected him as an amiable old gent facing to the east, where he came from, but also west towards Canterbury where he died aged 88. More interesting is Shamma’s choice of Eanflaed, the queen of Northumbria whose husband Oswiu convened the Whitby Synod; she was Wilfrid’s patron who guided his education and cleared the way for his early travels, but later, as a widow, becoming Abbess of Whitby when Wilfrid, by then Bishop of York, was able to support her in return in the fraught church-state politics of the time. She’s seen here twice, as a young queen and an elderly nun.

What is interesting about Eanflaed, says Chris Baily, is that she was a powerful woman in the church of her day as they often were, both lay and cloistered, before the Roman Catholic hegemony relegated women to second class status. Now they have great influence again, we even have female bishops.

But there should have been eight Shamma portraits in the exhibition, cut to three because Baily was unable to raise enough funding due to the pandemic. Art in the Churches was founded by Baily in 2017 to bring accessible contemporary art into communities, animating distant history and at the same time addressing the increasingly worrying underuse of these ancient architectural wonders. Its first exhibition, Sculpt, commissioned sculpture from 25 artists inspired by the medieval churches of the North Yorkshire market town of Masham and surrounding villages, seven in all.

The From Rome to Ripon project has been his second, but it almost didn’t come off. He trimmed the programme substantially, and raised enough money, £35,000, from the cathedral, local authorities, private donations and the Sainsburys’ Jerusalem Trust to mount the present exhibition. He is fundraising now for another £400,000 to complete the commissions and tour the whole exhibition, perhaps first travelling to Hexham Abbey in Northumberland, also founded by Wilfrid.

For centuries churches were our only public art galleries and as Sara Shamma observed of the 13th century carving she found at Ripon it was not always sacred but often profane and even, she says, satanic. In recent years contemporary art has returned to hallowed buildings with, to name a few, the cathedrals of Gloucester, Ely, Chester, Lincoln, York and Salisbury becoming galleries for new work, and from June 27 to September 6 with Together We Rise the 940-year-old Chichester Cathedral is hosting the work of 25 sculptors inspired by the pandemic, which could hardly be more topical.

Site specific work such as Shamma’s not only connects the modern eye with what is for most people a barely imaginable past, it shows that our great temples are not dead monuments to a bygone age but historic buildings with a dramatic modern presence that can entertain contemporary audiences with their stories.

There is no difference between the work in the 7th century and now, says Shamma, in that it is perceived by a human brain and executed by a human hand. “It happens now as it did then” she says. “But now the tools are different, that’s all.”